Fred Pearce in The Guardian 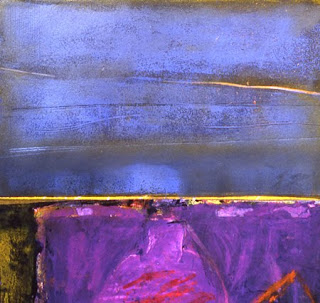 Fred Pearce thinks we need more wind farms, but even he says building them on peat bogs isn't sensible....
Read his article titled "How a wind farm could emit more carbon than a coal power station" in The Guardian online (August 13)
As he says, "Scottish peat bogs hold three-quarters of all the carbon in British ecosystems – equivalent to around a century of emissions from fossil fuel burning."

The above painting, "Inner moorland alt caim" by Jon MacLeod was one of the first paintings shown on the Artists against wind farms website, when Anne Campbell and Jon McLeod sent us photos of their paintings, and their way of life as crofters on the Isle of Lewis.
The fight to save Lewis goes on, as this link to Hebrides News shows, and you can find out more by going to www.mtlewis.org.uk

And for a reminder about The Shetlands, go to www.sustainableshetland.org
Posted by Artists Against Wind Farms at 8:35 PM