So Much Wind, by Struan Stevenson MEP 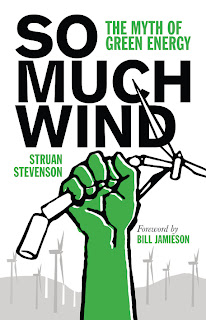 ‘This is a timely and important book, coming when more and more people are beginning to realise the folly of the SNP’s plans to make Scotland the ‘Saudi Arabia of renewables’. It analyses the human, financial and environmental cost of wind turbines and shows how misguided current policy is. This should be compulsory reading for all national and local politicians, to encourage them to stop more wind turbines being erected; either that, or voters make the choice for them’ – Martin Livermore of the Scientific Alliance

Struan Stevenson  has served as a Conservative Euro MEP for Scotland since 1999. He is President of the Climate Change, Biodiversity and Sustainable Development Intergroup and Chairman of the European Parliament’s Delegation for Relations with Iraq. In 2010 he was appointed by the Organisation for Security and Cooperation Europe (OSCE) as a Personal Representative (Roving Ambassador) of the Chairman in Office (Kazakhstan) responsible for Ecology and Environment with a particular focus on Central Asia. His previous book, Stalin’s Legacy, was published in August 2012.

For more information, go to this link.

Posted by Artists Against Wind Farms at 7:44 AM