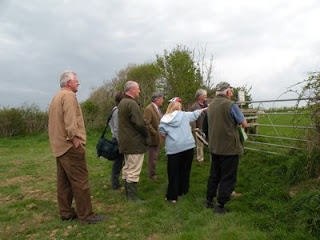 This Friday I went over to Yelland on the Taw Estuary to meet up with Mo Mugridge and some other interested locals who wanted to show North Devon MP Nick Harvey the site of the proposed Bickleton Turbines. These three 400ft high turbines would be on the hill above the villages of Yelland and Frmeington, and would overlook Braunton Burows. They would also face the hills across the estuary, and the twenty two 360 ft high turbines of the Fullabrook Down Wind Farm.
Mo Mugridge of Bickleton Against Turbines (light blue jacket) points to the field in which the turbines would be. We did not go any further up the footpath as the field was full of ewes and lambs.
A journalist from the North Devon Gazette joined us and took some photos... look out for next Wednesday's North Devon Gazette. He interviewed Nick Harvey and Mo Muggridge and you will be able to read what they had to say about this proposal in the Gazette.
More information about the Bickleton turbines on www.artistsagainstwindfarms.com
Posted by Artists Against Wind Farms at 9:58 PM