Christopher Booker in The Daily Mail

Read more: http://www.dailymail.co.uk/news/article-1361316/250bn-wind-power-industry-greatest-scam-age.html#ixzz1FHjjEzEh
Posted by Artists Against Wind Farms at 7:50 PM No comments: 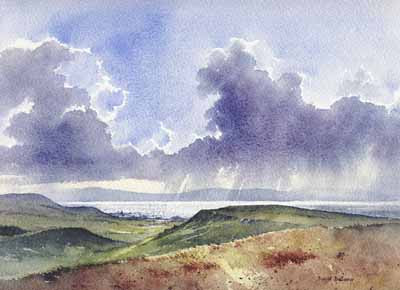 After 7 years of fighting to save this upland area, the SOCME group have sent out a Press Release to express their delight that the Welsh Assembly has not granted planning permission for the Mynydd y Gwair Wind Farm.

How sad it is that Mal Davies and Jan Mosely, who fought so hard to save the mountain, are not alive to join the celebrations. Please take a look if you can at the website that Mal Davies set up: www.socme.org, and be grateful to all who fought to preserve this beautiful mountain for future generations to enjoy.
here are some more links : protest walk
Paint it day from the reservoir
Glyn Morgan, Chairman of SOCME, with Jenny Keal (artist) at Cefn Coch, 2007
Posted by Artists Against Wind Farms at 6:56 PM No comments:

Go to the CARST website and read what Rory Stewart had to say about turbines in Cumbria.
How good it is to hear him speak up for some of those who campaign against the industrialisation of our most beautiful wildernesses.
Posted by Artists Against Wind Farms at 6:48 PM No comments:

The Druim Ba Windfarm proposal is for 23 turbines, almost 500 feet high, at Druim Ba on the Blairmore Estate, within one mile of 35 homes. Go to their site to learn more.

Also found on their site, a link to a report in Scotland on Sunday, about plans to put 1000 new turbines in Scotland's forests:
http://scotlandonsunday.scotsman.com/news/Anger-over-Scots-forest-windfarms.6721201.jp

Posted by Artists Against Wind Farms at 6:56 PM 1 comment:

Up on Fullabrook Down last Sunday 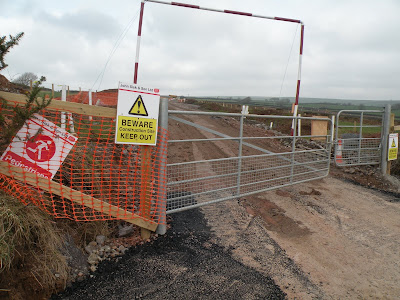 I went up on to the Fullabrook Down Wind farm site on Sunday. it wasn't a great day for taking photographs, cloudy with poor visibility much of the time, but I took some video clips as well, which will be uploaded later.
This photograph was taken between the positions of turbine s 6 and 10 on this map:
http://www.artistsagainstwindfarms.com/walks/queens-exhibition/fullabrook-folder/fullabrook-image-map.html

If you click on the button between turbines 9 and 12 you can see a painting I did of a sheep and her lambs, on the hill as it was before the diggers moved in. (Apologies for the fact that one or two of the links no longer work, it needs updating)
Christine Lovelock
Posted by Artists Against Wind Farms at 11:06 AM 1 comment:

Good to see this article by Andrea Leadsom MP on the ConservativeHome blog's Comment page:

http://conservativehome.blogs.com/platform/2011/02/andrea-leadsom-mp-onshore-wind-farms.html
Posted by Artists Against Wind Farms at 10:19 AM No comments:

How good it was to hear the CTV Presenter explaining that when wind turbines were described as "too Green" this did not mean "too Green" in the environmental sense. John Laforet gives a most excellent interview.
Posted by Artists Against Wind Farms at 11:09 AM 1 comment:

The Tax Payers' Alliance have raised a very important issue about EU funding for "Green" groups. Nearly all these groups support plans to cover our countryside with giant industrial (or should we say White Elephant?) wind turbines.

Here is a video the TPA has made about the subject:

Please read more if you can, and find out how you can put pressure on the EU Commission, on this page:

http://www.taxpayersalliance.com/eu/2011/02/eu-commission-stop-spending-money-subsidising-environmentalists.html
Posted by Artists Against Wind Farms at 8:03 PM No comments:

How useless is the giant Reading turbine?

http://www.telegraph.co.uk/earth/energy/8315304/Wind-turbine-costs-more-than-it-saves.html
Posted by Artists Against Wind Farms at 11:40 AM No comments:

We were sent a link to this blog by a supporter in Yorkshire...

The text in green below is a quote:

"The Great Green Hope, power from garden ornaments, turns out to be more polluting than those coal fired power stations they keep trying to sabotage. Of course, that's okay because they aren't polluting here."

Read more on the blog: http://underdogsbiteupwards.blogspot.com/2011/01/goodbye-ecosystem-hello-foe.html

This links to a Daily Mail article as well, about the mining of rare earths in China - we linked to it ourselves previously.

We would like to add a reminder too of the fact that in China some years ago, when some villagers protested against a wind power station, the police opened fire on them and several protesters were killed. Had they been protesting against a nuclear or coal powered power station, there would have been a world-wide uproar, of course.
Posted by Artists Against Wind Farms at 8:13 PM No comments:

http://www.dailymail.co.uk/home/moslive/article-1350811/In-China-true-cost-Britains-clean-green-wind-power-experiment-Pollution-disastrous-scale.html
Posted by Artists Against Wind Farms at 6:33 PM 1 comment: