Artists against windfarms is non-political, and we have been joined by artists from all political persuasions.

Campaigners in Devon, for example, have been supported strongly in the fight against the industrialisation of Devon by local MPs Nick Harvey ( LibDem) and Geoffrey Cox (Conservative) as well as Nigel Farage (while UKIP Leader).

It is in fact hardly surprising that many politicians - from all parties - come out against wind turbines when they happen to be in their own constituencies, whatever the party leaderships may think about the matter.

The Wind Turbine topic was raised briefly during the Leader's Debate on the BBC last night, and here is an amusing comment regarding this by Damian Thompson on the Telegraph Leader's Debate LiveBlog:

It begins: "I can’t believe that Nick Clegg was stupid enough to launch into a hymn of praise to wind turbines."

To read more go to the Blog and scroll down to the 9.19 entry.
Posted by Artists Against Wind Farms at 7:38 AM No comments:

If you speak German, have a look at this video on RTL Regional. There are obviously some people in Germany who do not like wind turbines!

A web-page translation by Babel Fish gives an idea of what this is about (simply paste in the RTL web-page address)
Posted by Artists Against Wind Farms at 10:11 PM No comments:

Go to this page on the EPAW website to learn more.
Posted by Artists Against Wind Farms at 7:12 AM No comments:

Save the whales so that they can save us?

No one knows what the spread of offshore wind farms will do to the whale population worldwide. Off-shore wind power to many people means out of sight, out of mind - only a few people (like Christopher Booker for example) seem to care enough to point out its expensive drawbacks.

This article in the New Scientist should make us all think again about whales, and their importance to the oceans, and the ocean's carbon cycle.

There are several links on this blog to research and articles warning about the effects of underwater noise on whales, dolphins, and even fish. Whatever happened to the precautionary principle?

You can find them here.
Posted by Artists Against Wind Farms at 4:58 PM 1 comment:

Jane and Julian Davis have been driven out of their home by the noise of wind turbines on land half a mile from their home in Lincolnshire.

They have now launched a High Court writ claiming for compensation of £380,000 from the turbine owners, the landowners and the builders. You can read more about this in the Daily Mail here.

Posted by Artists Against Wind Farms at 8:57 PM No comments: 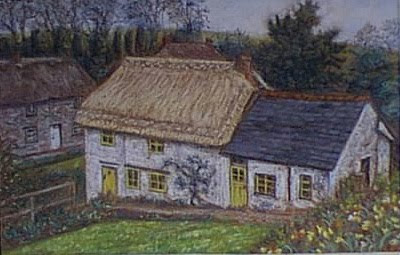 Clovers Cottage, Bowerchalke, as it was in the 1960's and early 1970's, when it was the world's only thatched space laboratory.

The "Beautiful Minds" series on BBC4 tonight (at 9pm) focuses this week on my father James Lovelock and should prove interesting.

As mentioned in this article, when he left his job at the MRC and set up as an independent scientist, he worked in our house in Bowerchalke, and nearly all our family helped with the taking of measurements . This cottage in our garden was used as a laboratory for several years.

Posted by Christine Lovelock
Posted by Artists Against Wind Farms at 7:17 PM No comments:

Terry Wogan on swine flu and other scares

Quote from the article:

"Although I won't be around to see it, I believe that in 50 years' time, a bigger penny will drop, and our descendants will look at each other in disbelief and say, "All those windmills! What were they thinking of?"

Read the article in The Telegraph online
Posted by Artists Against Wind Farms at 8:35 AM No comments:

"We all care about beauty - why don't politicians?" Why has beauty become the word that no one dares mention?

Read this article in The Guardian by Simon Jenkins, and wonder why those in charge of us no longer seem to value something so precious to all of us, something that lifts our spirits and makes life worth living - whether it is a primrose, a soaring bird, a work of art, or a landscape.

http://www.guardian.co.uk/politics/2010/apr/08/beauty-politicians-election
Posted by Artists Against Wind Farms at 7:55 AM No comments:

www.wind-watch.org is worth a daily visit...


Remember how the public have been encouraged to cycle around these "wind farms" as if they are real farms and country parks rather than industrial power stations...

http://www.wind-watch.org/news/2010/03/23/scots-wind-farm-shut-over-safety-fears-after-150ft-turbine-blade-falls-off/
Posted by Artists Against Wind Farms at 10:21 AM No comments:

Another must-read article by Christopher Booker in The Sunday Telegraph today, spells out the fact that Ed Miliband's legislation will cost us hundreds of billions over the next 40 years, while doing nothing to reduce the world's overall carbon footprint.
Posted by Artists Against Wind Farms at 9:08 PM No comments:

Happy Easter to all wind warriors

You can see more of his work on the artistsagainstwindfarms website at this page.
Posted by Artists Against Wind Farms at 9:03 PM No comments:

To anyone who missed the comment on a recent posting (about Costing the Earth) a reminder that there is a sculpture on EBay highlighting the damage wind farms do to birds. Do look - only 7 hours to go!

http://tinyurl.com/thewindenergy
Posted by Artists Against Wind Farms at 10:43 AM 1 comment: