"We have just heard that Broadview are now beginning to gather together their weaponry to launch an application of 5 turbines and an ugly latticed mast. They are holding a pre-application exhibition on the 8th December in a little village hall down here in Warwickshire.
Two of us (artist and photographer) have just produced a pre-application video to bring home the very deep passion and connection that we have to where we live in Shakespeare Country."
John Bolton
www.frawt.org.uk
Posted by Artists Against Wind Farms at 12:10 PM 1 comment: 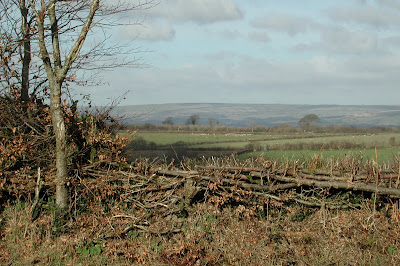 The proposal for 9 wind turbines at Batsworthy Cross near Exmoor was turned down unanimously at the Planning Meeting this summer - all 16 Councillors on the North Devon Planning Committee voted against it. The Hall where the meeting was held was bursting at the seams with local people who came to speak against the proposal. Not one local person spoke in favour of the wind farm, and yet the developers persist in their plans to impose their unwanted development upon the people of North Devon.
Posted by Artists Against Wind Farms at 11:36 AM No comments: 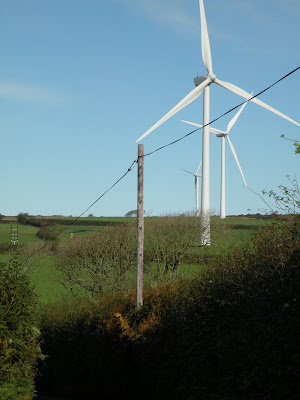 This photograph was taken on a calm clear day near the end of October.
I was up on the hills again today with another campaigner. The weather was very different. It was misty, and many of the turbines, even some very close to us, were barely visible as they were shrouded with white mist or low-lying cloud. At times the turbines would vanish behind the cloud, and then emerge again, sometimes only partly visible, so that you could see the mast, and perhaps parts of the lower blades.

There were no lights that we could see, and we could not help worrying about the safety of the numerous helicopters that fly to and fro across this area, sometimes from Chivenor Air Base, sometimes rescuing people from the sea or cliffs, or transporting them to North Devon Hospital.

There are so many health and safety issues regarding this wind farm that do not seem to have been taken seriously into account when this wind farm was passed. So many of the turbines are far too close to roads, or footpaths, or the homes of people who live on these hills, or in the valleys below the turbines.

The Caithness Wind Farm Information Forum gives lists of accidents caused by wind turbines, although as they say their list is probably only the "tip of the iceberg."

Christine Lovelock
Posted by Artists Against Wind Farms at 2:45 PM No comments:

This is a true story of an old freedom fighter's valiant stand against the unjustice of wind power, with music as a weapon.


On April 9th, 1940 Denmark was occupied by German troops. The first years of occupation there was no resistance. Then a small group of youngsters in a high school in Aalborg, Northern Jutland started a different kind of sabotage and began to steal weapons from the Germans. Their activities had no real results, but the youths became known as the Churchill-group. After a year or so the members were arrested and imprisoned for long time.


Knud Pedersen was one of them. Today he is 86 years old and one of the last surviving freedom fighters from the time of German Occupation (1940-1945). After he was finally freed, for decades Knud Pedersen and his wife Bodil have had a house in the forests of Southern Sweden. In 2009 their paradise was threatened by a wind project in the forest around their home. That made Knud start his resistance fight against this injustice against humans. His contribution to our common resistance is a musical composition called "Wind Power Horror Serenade", which will be played in the middle of Copenhagen on December 9th.

This text and the image above were sent to us by Peter Skeel Hjorth
Posted by Artists Against Wind Farms at 3:01 PM No comments:

Seen on EPAW, the European Platform against windfarms

http://www.epaw.org/media.php?lang=en&article=pr3
Posted by Artists Against Wind Farms at 8:02 PM No comments:

Watch this interview on YouTube with Martin Agerup of CEPOS and Hugh Sharman of Incoteco discussing Denmark's experience with wind energy.

Denmark produces the equivalent of 20% of their electricity from wind,
but they must export most of it to neighboring countries.
Often this electricity is sold for much less than it costs to produce it, and the Danish taxpayer pays the difference.
Posted by Artists Against Wind Farms at 7:50 PM No comments:

Here is a quote I have taken from the Comments under an article to be read here:

The quote is from a Comment by Barry Funfar:

"The fact that the effects are cumulative and increase in severity as time goes on is major. Someone siting on our porch for 30 minutes is just not going to get it. And foolishly some do drive-byes expecting to hear some loud noises. Loudness is not generally the issue. It is the special characteristics of the noise that drives one crazy."

The article and the Comments both ask why it is that developers, the wind industry, some Greens, and other supporters of wind power ignore the distress of those who are suffering from wind turbine noise.
Posted by Artists Against Wind Farms at 12:22 PM No comments: