Following President Obama's speech yesterday James Delingpole has highlighted the crucial point about virtually all political action made so far against climate change - so far it has always made matter worse, for everyone, and been completely counter productive as far as reducing CO2 emissions.

"We will respond to the threat of climate change, knowing that the failure to do so would betray our children and future generations. Some may still deny the overwhelming judgment of science, but none can avoid the devastating impact of raging fires, and crippling drought, and more powerful storms."

"The first sentence is a blatant untruth. Concerted global action so far to deal with the threat of climate change has resulted in: higher energy prices; more deaths from fuel poverty; more intrusive regulation; the destruction of rainforests and the squandering of agricultural land on biofuels; higher food prices; famine and food riots – as a result partly of the drive for biofuels; the entrenchment of corporatism and rent-seeking to the detriment of free markets; the ravaging of the countryside with ugly solar farms and even uglier wind turbines; the deaths of millions of birds and bats; the great recession. How any of this has in any way benefited either our children (who are going to find it far harder to find a job) or future generations is a complete mystery."

http://blogs.telegraph.co.uk/news/jamesdelingpole/100199161/obama-declares-war-on-reality/
Posted by Artists Against Wind Farms at 7:34 AM No comments: 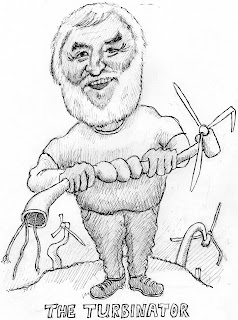