Here is Part 2 of MEP Struan Stevensons speech.
Posted by Artists Against Wind Farms at 7:11 PM No comments:


Scottish Tory MEP Struan Stevenson has lent his support to a campaign by Communities Against Turbines (Scotland) against the scandal of industrial wind developments in Scotland. Speaking at Ballantrae Community Centre on Tuesday 9th August 2011, Mr Stevenson delivered the speech which can be seen on YouTube, see Part 1 above:

How good it is to see a politician who is truly not afraid to speak up against vested interests!

For more information about CATS, go to this website:

http://www.communitiesagainstturbinesscotland.com/
Posted by Artists Against Wind Farms at 3:12 PM No comments:

"World famous artist David Hockney has slammed plans to build “ugly” wind farms around Bridlington, which he thinks will spoil the area’s countryside.

Speaking exclusively to the Free Press, Mr Hockney – who lives and works in Bridlington – urged people to “say no” to the turbine plans."

You only have to look at his paintings of trees to know that he has a deep connection with the land on which they grow: they are rooted in Yorkshire soil.

And for links to articles about his latest Exhibition:


For more about wind farms in Yorkshire go to this excellent website:
http://www.southdalewindfarm.co.uk/
Posted by Artists Against Wind Farms at 6:52 PM No comments:

Yet more on the Atlantic Array 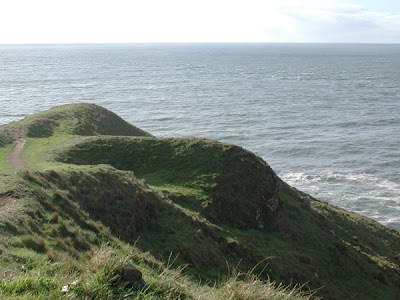 Looking out to sea, from Baggy Point, near Croyde, in North Devon.

We have uploaded a page today with more information about the Atlantic Array, including links to the developer's proposals, and press reports from both sides of the Bristol Channel.
Local newspapers in North Devon are already receiving numerous letters of concern about these proposals, and concern is mounting too across in Wales.
When the Fullabrook Down Wind farm was proposed there was much local opposition against it, but at the same time, there were also many members of the public who took little interest. Perhaps they had seen small turbines in Cornwall, perhaps they imagined the turbines would be somewhere up on the hills, out of sight. Now people understand how big modern turbines are, and they realise that 4oo (or more) giant turbines out at sea will not be an insignificant sight.
Posted by Artists Against Wind Farms at 7:50 PM No comments:


This video was made in August without a proper microphone, and I was not able to record the sound properly. I was however well aware that turbine noise was already becoming a problem for residents living "in the wind farm".
Now some residents have gone public about this, and you can read what they have to say here:

http://www.thisisnorthdevon.co.uk/Turbine-noise-destroying-lives/story-13380064-detail/story.html
Posted by Artists Against Wind Farms at 5:24 PM 1 comment:

This link includes a video which is worth watching. There is clip near the end showing an offshore wind farm which is enough to give shudders down the spine of anyone who thinks offshore is visually acceptable.

More about the Atlantic Array 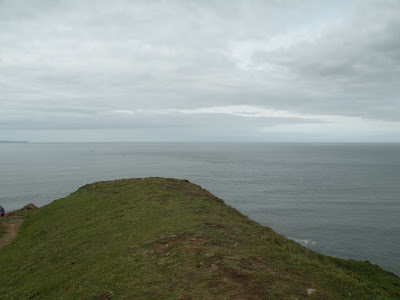 Baggy Point, between Croyde and Woolacombe, North Devon, with Lundy on the horizon at the left.

I came back on Thursday (after a trip to the excellent Wind Farm Conference in Cheshire, organised by Conservation of Upland Powys) and went out to Baggy Point, one of North Devon's most famous landmarks. It wasn't the best of afternoons, the sky was overcast, and visibility was not as good as it can be, but from this spot I could see Dartmoor to the south, the Welsh coastline to the north, and the hills of Exmoor to the the east. Sadly I could also see the three turbines near Great Torrington on the hills to the South, in front of Dartmoor, and behind me there were the 22 Fullabrook turbines. If the Atlantic Array is built, there will be hundreds of gigantic wind turbines stretching across this blue horizon.

There are many who say "Offshore not onshore" but the truth is that offshore wind turbines are as environmentally damaging, as visually disturbing, and even more costly than the onshore ones. It is true that if they are far enough away, they don't cause a noise nuisance to human neighbours, but what their noise will do to whales, to porpoises, to seals, and all other marine animals and fish, is something that all of us who care about wildlife should be deeply concerned about.

http://www.northdevongazette.co.uk/news/first_look_at_giant_wind_farm_plans_1_1020646
Posted by Artists Against Wind Farms at 6:16 PM No comments:

Reminder about the Atlantic Array

Posted by Artists Against Wind Farms at 6:44 PM No comments: 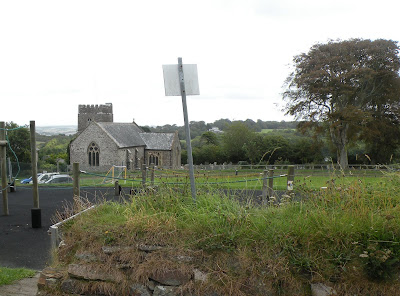 Abbotsham is a village in North Devon, south west of Bideford and close to the Cornborough ranges on the south west coast path. The Atlantic Array cables are due to make landfall across these cliffs, and the cables will come inland through the Parish of Abbotsham.
The village hall was the chosen location for the first of RWE npower renewables Public Exhibitions, as part of the Consultation Process for the Atlantic Array.
I went there this morning, with campaigners Joanne and Jim Bell, and we were surprised at the size of the crowd. Now that Fullabrook is built, people in Devon are waking up to the reality of industrial wind power, and most of the people that we spoke to in the Hall were shocked by the images on display. We ourselves had not realised quite how visible this giant wind farm would be, from most of the North Devon Coast, from Baggy Point, from Croyde,, from Putsborough Beach, from all the beauty spots that are Devon's greatest asset.

More to come.
Posted by Artists Against Wind Farms at 12:24 PM No comments:

More on the Atlantic Array 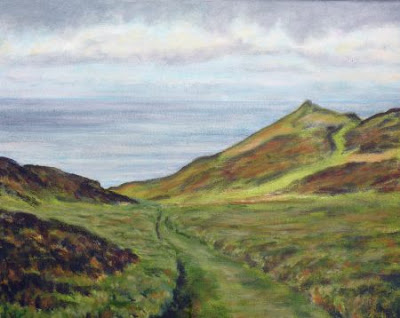 At the moment, from Morte Point in North Devon you can see Lundy, and the sun setting over the Atlantic Ocean. If the Atlantic Array goes ahead, you will be able to see up 250 wind turbines. They will be about 14 kilometres (8.7 miles) away. To put that in context, the 22 Fullabrook turbines can be seen from Yes Tor on Dartmoor (approx 40 km, 25 miles, away)

Public Exhibitions are to be held this weekend in North Devon, on Saturday 10th September from 10am to 5pm. at Abbotsham Village Hall, Abbotsham, Bideford, EX39 5AP , and on Sunday 11th September at Lovacott Village Hall, 5 Lower Lovacott, Newton Tracey, Barnstaple, EX31 3QH, from 11am to 4pm.

More details can be found on the RWE npower renewables website here:


It would be nice to think that the Greens would be there to speak up for the whales and porpoises and other wild life that will be threatened by this proposal (ready to set sail in the Rainbow Warrior once again?) Somehow that doesn't seem too likely.
Posted by Artists Against Wind Farms at 10:15 PM 2 comments: 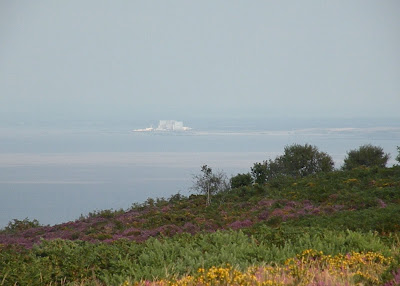 Posted by Artists Against Wind Farms at 4:01 PM No comments: