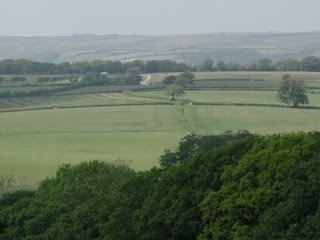 This photo was taken looking towards the Three Moors site, with the hills of Exmoor behind it.

I went to South Molton yesterday to show support for the Two Moors Campaign Group when a Public Inquiry opened yesterday at South Molton Assembly Rooms. The room was packed with local residents (someone said there were more than a hundred people, I did not count but quite a few people had to stand as there were not enough seats.) They came to show their disapproval of Airtricity's plans to put nine 105 metre turbines at Three Moors, and Coronation Power's plans for four 100 metre turbines. ITV cameras were there to film the opening of the Inquiry, which will last for about four weeks.

A new Rural Alliance has been formed to help fight the four different applications in this area close to Exmoor.. read more about this (Western Morning News, June 7th)

Posted by Artists Against Wind Farms at 7:42 PM