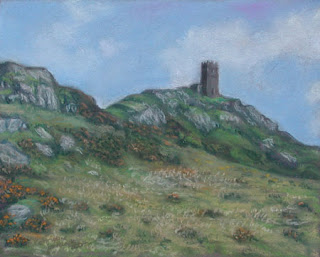 Saved from turbines, the church of St. Michael de Rupe at Brentor near Dartmoor is under a threat of a different kind now. You can read more about this in the Western Morning News

Until I did my "Walk round Devon's Wind Farm Sites" I hadn't noticed the fact that Churches named after St. Michael are often built on the tops of hills. This has left them especially vulnerable to the wind farm menace.

As mentioned earlier, September 26th is the date for the International Protest March against the numerous turbine projects that threaten world famous Mont Saint Michel.
Read more about it at these links:

Information in English on the EPAW website
S.O.S. Mont-Saint-Michel
Posted by Artists Against Wind Farms at 1:26 PM