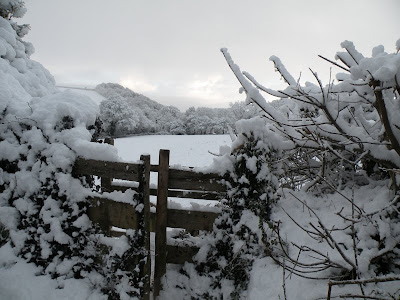 This is one of the ways you can go if you want to see the Fullabrook Wind Power Station, which is being built this winter - across these fields and up onto the hills. That is, if you have skis, or can cope with paths so slippery that they are like ice rinks.


In the context of so many articles about the North Atlantic Oscillation written recently, ( such as this one, by Fred Pearce in the Daily Mail) here is a timely reminder of this paper that was published on the Country Guardian website several years ago:


These sentences come from the Conclusion of Prof. Cobbold's paper:

"Governments have a responsibility to ensure that the nation’s electrical power supply is robust and secure. The safety of the UK’s population - especially the elderly, the infirm, those in fuel poverty, and the poorly prepared - should not be put at risk by commercially-driven stakeholders and implicit assumptions that the weather will not change."

I live in North Devon, only two or three miles from the site of the Fullabrook Down Wind Power Station, where the turbines will be erected soon. It has been bitterly cold here in North Devon over the last few days, especially on Christmas Day. If the weather is the same next year at this time, it will not be safe to walk along ancient Burland Lane, for fear of ice throw from the turbine blades.... if they are moving at all, that is, since we have had so little wind during the freezing weather. Let us hope there will be some other form of power still, such as that that comes -whatever the weather - courtesy of Hinckley Point nuclear power station.

Christine Lovelock
Posted by Artists Against Wind Farms at 11:52 AM