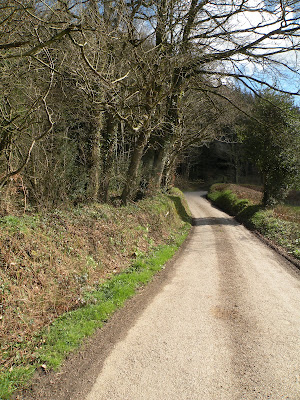 I went to the Pre-Inquiry meeting today at Bishops Nympton Village Hall. It was a beautiful day, sunny but fresh, with little wind. I took the X7 bus from Barnstaple to South Molton and walked the rest of the way, maybe three or four miles, along tiny lanes, with bridges over streams, sheep and lambs grazing in fields beside the road and the roadside banks studded with primroses and daffodils, or wood anemones when the road skirted its way around some woods (as in this photograph.)

This hardly seems a friendly name to choose. A true friend listens, and does not impose. Yet again today, the people of the area around Batsworthy Cross filled the hall and made it abundantly clear how much they oppose the idea of having giant industrial turbines imposed upon them.

At the meeting, Rosemary Brian asked if the Public Inquiry could be held in Barnstaple, as Bishop's Nympton was difficult to travel to by public transport. I felt like standing up to say that I had come by bus myself part of the way, and enjoyed the ride, but to be fair, there are some steep hills between South Molton and Bishop's Nympton, and it would have been hard work with boxes of documents to carry as well.

Sensibly the Inspector decided that Bishop's Nympton Village Hall was to remain the venue.

TREA, The Rural Exmoor Alliance (TREA is CPRE Devon, the Exmoor Society, the Two Moors Campaign and several local parish councils) invited Npower to put up a blimp for the site visit. Npower refused this invitation.

The Public Inquiry will last four weeks, and begin on June 12th.
Posted by Artists Against Wind Farms at 8:40 PM