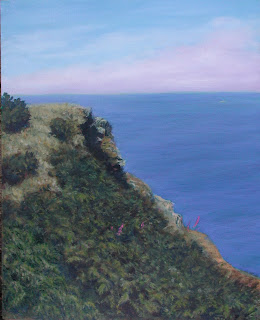 BT are seeking the opinion of local councillors about a proposal to put a possible 3 turbines on land near Mullacott Cross, which is not far from Ilfracombe. These proposed turbines would be close to the Fullabrook Down Wind Power Station, adding even further to the desecration of the beautiful North Devon countryside. You can read more about this in the North Devon Gazette ( August 19th ) - the article is not yet online, but if you type Mullacott Cross into Google Maps you can see the approximate location.
This is a painting that I did following a walk along the cliffs near Lee Bay, which is on the North Devon coast not far from Mullacott Cross.
Posted by Artists Against Wind Farms at 9:18 PM