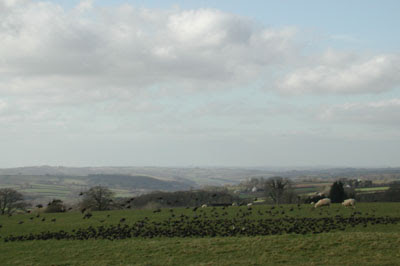 Starlings settling in the field where Npower planned to put nine 103m high turbines, on a ridge with views of Exmoor close by, and Dartmoor to the South.

North Devon Council Planning Committee met yesterday at Bishops Nympton Village Hall to decide upon Npower's application for nine wind turbines at Batsworthy Cross. The hall was packed to overflowing with locals, and the meeting took many hours as local after local after local spoke against this proposal. One after another, they covered each relevant topic in detail, demonstrating a breadth and depth of knowledge that must have impressed the Councillors.
There was emotion too, as many spoke of their love for the countryside in which they live.
From an artistic perspective, an important point was by a well-known local artist about the way in which wind turbines affect our sense of scale when looking at a landscape.
No local people at all (as far as I know) spoke in support of the proposed wind farm. One interesting speaker said that he had been asked to speak in support of the Proposal (by the Green Party or the Developers, I am not quite sure) because of his expertise in renewables, but having looked at the proposal, he changed his mind and urged the Committee to refuse the application!

This article by Martin Hesp was in yesterday's Western Morning News:
http://www.thisisdevon.co.uk/Today-decision-day-wind-farm-battle/story-12811375-detail/story.html

This article by Andy Keeble was in yesterdays' North Devon Gazette:
http://www.northdevongazette.co.uk/news/decision_day_for_giant_wind_farm_1_928748
Posted by Artists Against Wind Farms at 7:49 AM