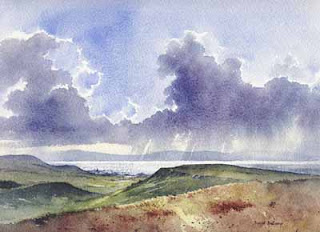 This painting by David Bellamy was one of the first to be shown on our website. The fight to save Mynydd y Gwair has lasted for many years  (you can read more here:  http://www.artistsagainstwindfarms.com/windfarms/mynydd_y_gwair.html).


"More than 60 campaigners packed the public gallery for the debate by a Swansea Council committee which heard views both for and against the controversial scheme.

One of those who spoke was Glyn Morgan, chairman of Save Our Common Mountain Environment, who claimed 87 per cent of people in the local community were opposed to the scheme.

"It would be sacrilege to develop on Mynydd y Gwair," he said.

He stated that red kites had successfully moved into the area and there were two breeding nests, and that the land had grazing rights with 120 commoners with flocks of sheep and also cattle.

The land was also popular with walkers, horse riders and people flying model aircraft, he added.

He urged the council to "make the people  proud to be citizens of Swansea and oppose the development"."

You can read more here:

Posted by Artists Against Wind Farms at 6:20 PM