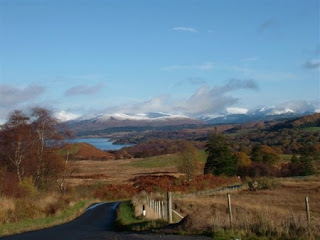 
Artists against wind farms welcomes new contributors Karl and Beryl Pipes from Argyll, in Scotland. Karl sent us this photograph of the stunning landscape around Loch Awe, and more of his work will be seen on the new photographers web-page to be launched later this week, when we feature the work of photographer Tom Hutton, who lives not far from Nant-y-Moch in Mid Wales.

Karl's beautiful photograph, and Beryl's watercolour of the same landscape (to be shown later today) come just as we hear ominous news from Scotland that Ministers are going to grant new powers to Forestry Commission Scotland to negotiate with the private sector to build wind farms on its land.
Posted by Artists Against Wind Farms at 1:29 PM