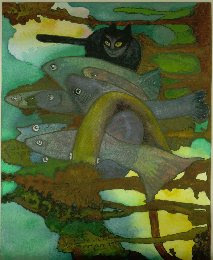 Watercolour:
Bandit Cat
His Dream of Hunting in the Kelp Forest

Artist Kathryn Logan from Kintyre, whose work can be seen on the artists againstwindfarms website, sent us this posting (not about windfarms this time, but about another environmental concern):

"It horrifies me that a migratory fish, the salmon, is trapped in cages, its migratory instinct thwarted [I have read that farmed salmon go mad and become frighteningly aggressive]. They are kept in such over-crowded conditions that they have to be pumped full of chemicals to survive [like battery hens]. These fish farms cause serious environmental pollution and create a danger to wild fish. At the moment we are fighting, not a wind farm this time, but a proposed salmon fish farm in Kilbrannan Sound, north of Carradale, on the east coast of Kintyre. This is more than the industrialisation of a completely unspoiled area with its wonderful views across Kilbrannan Sound to the peaks of Arran, this is an environmental time bomb: evidence shows that salmon farms are a source of danger to the survival of wild fish stocks and should not be sited close to wild salmon river systems.
Yet this area, chosen by Lakeland Marine for their proposed salmon fish farm, is on the migratory route of wild salmon to their natal rivers further north in Loch Fyne, and is close to a number of rivers where wild salmon stocks are so low that measures are actually being taken to protect them. Salmon farming endangers wild fish through the transfer of parasitic sea lice, causing many wild fish to die; escapees interbreed with wild salmon, diluting gene banks; pharmaceutical chemicals and waste products used in the rearing of farmed salmon pollute the marine environment and contaminate shellfish, which, if eaten, can cause human disease.

She also asks us to include this information below:

The End of the Line for Open Net Cage Salmon Farming?

The film features ghillie Brian Fraser from Scotland; John Mulcahy from Save The Swilly in Ireland; Orri Vigfusson from the North Atlantic Salmon Fund in Iceland; Alexandra Morton and Dr Daniel Pauly from British Columbia; Dr Matthias Gorny from Oceana in Chile as well as Sven Helge Pedersen, King Harald and Vegard Heggem in Norway.

Posted by Artists Against Wind Farms at 6:27 PM