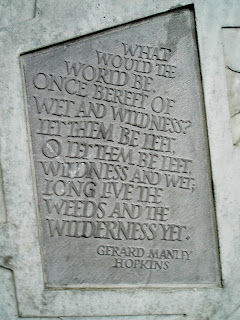 We photographed this inscription on the outer walls of the Scottish Parliament while up in Scotland some time ago, giving support to anti-wind farm campaigners.

Scottish film maker David Graham Scott has had a film about life in a remote Scottish valley banned by the BBC, because of its" lack of impartiality" on the the issue of wind farms. Yet he has produced other controversial films that the BBC was happy to show.

You can read more about this here (Scotland on Sunday) including a quote from campaigner Bob Graham, who says that the BBC is itself biased in favour of wind farms.

The Biased BBC website also raises this topic today, and shows a clip of another of David Graham Scott's films that - presumably - was seen as completely impartial in the eyes of the BBC. This film about a Scottish republican campaigner was made as part of a series called The New Ten Commandments which was broadcast last year. It apparently passed the BBC's impartiality guidelines despite the fact that it shows only one point of view, but a film that showed opposition to wind farms, by the same documentary maker, did not.
Posted by Artists Against Wind Farms at 8:14 PM