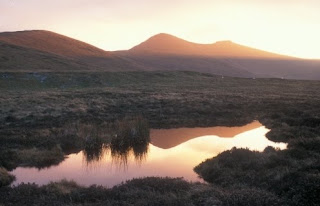 Following the protest this June at Nant-y-Moch Reservoir, we were approached by Tom Hutton, an award winning photographer who lives in Mid Wales and has given us his support.

You can learn more about him from his website www.tomhutton.co.uk, which includes an extensive biography. His passions include climbing, skiing, and cycling, and of course a love of nature itself, and he contributes to magazines such as Mountain Bike Rider, Country Walking and Trail, for example.

We now have a new page on the artistsagainstwindfarms.com website highlighting his work, and we are proud to display the statement he has written for us, which begins:

“The rolling uplands of the Cambrian Mountains are the closest Wales gets to true wilderness – a huge swathe on the map that isn’t crisscrossed with roads and car parks and towns and villages. It feels almost timeless even if it isn’t, and anything that compromises the skyline or the tranquility of this area would be nothing short of vandalism. ..." Do go to his page to read more.

Finally here is a link to photographs and videos from the protest walk at Nant-y-Moch organised by the Cambrian Mountains Society, which was led by David Bellamy and Christine Lovelock.
Posted by Artists Against Wind Farms at 7:06 PM