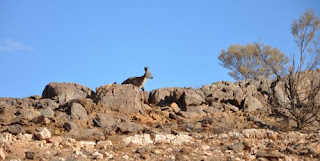 Red Kangaroo, one of the photographs from the Barrier Ranges sent to us by Marion Chapman.

Karl Pipes is one of the contributors to the Artists against wind farms website, and he sent us this text of a letter he wrote to the Editor of an Australian newspaper in the Barrier Ranges area.
We are showing Karl's letter on the blog, here below, just to remind anyone how ridiculous it is to call us Nimbys.


"Dear Editor
I have just read of the proposal to impose almost 600 wind turbines on the iconic and historic Australian landscape of the Silverton and Barrier range. I hope that I may be forgiven for interjecting in the discussion from so far away, but I (and many others over here) know full well what the effect of such plans can have on rural communities. This week we have learned that a plan to build one locally has been turned down by the Scottish Government. Much was our joy!
It is sad that in the cold light of day the proposers, far removed from the scene of their actions, are willing to desecrate an area which many people hold close to their hearts. I am told that solar power would be a much better product? We all know that installing turbines will kill or drive away our birdlife and bats, also wreck the local environment and therefore biodiversity. I know by personal experience how proposers will twist facts, tell half truths and sometimes untruths to forward these impositions onto communities. It is also sad that some community members will fall for the stories! Just to quote one instance, forestry planted areas can be described as 'semi industrialised landscape'. I enclose a photograph of the area that we have just saved from such a development. The claim then, is to say that they want to build a windfarm in an 'industrial landscape'! Well, a green forested area does not make a resonating thrumming noise that soaks into your sleep, or flap it's flickering arms at you from high above! I could go on, but I'm sure that the down side of these installations is well know to the authorities dealing with the proposal. I only hope that they have the moral fibre to accept that it will be the wrong place to build such an unacceptable imposition. If not, I can only deeply sympathise with those residents and visitors who will lose their beloved landscape to infernal machinery. Who will gain by it? I do know that the stress caused to residents can make some people quite ill!
Yours sincerely,
Karl Pipes, Scotland, UK."
Posted by Artists Against Wind Farms at 4:44 PM